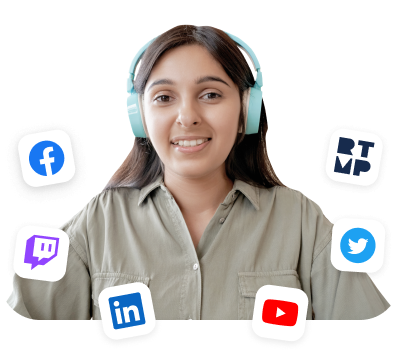 🚀 Want your live streaming to really take off in 2022? You're in the right place — these statistics about the audience and industry might help.

ln 2021, we waited to see if the live industry’s boost the previous year was due entirely to the COVID-19 pandemic. It wasn’t. Live streaming’s popularity stayed strong throughout 2021, showing that it’s not simply a trend but a sizable, profitable industry.

Although live and in-person events resumed to an extent in 2021 as people around the world started getting vaccinated, live video remained as popular as ever. Global streaming increased by 21% YoY between Q3 2020 and Q3 2021. Hybrid events, which contain online and in-person elements, became standard as many people were still unable to travel to live events. Nothing proved this more than 2021’s biggest hybrid event, the Olympic Games. Although TV viewer ratings for the 2020 Olympics plunged, it was the most-streamed Olympic Games ever, with 5.5 billion minutes of events streamed across social media and other online platforms.

People are still streaming more than they ever have before, with competition for viewers getting tougher each year. By arming yourself with knowledge of the live streaming industry, you can see what it will take to make it as a live streamer in 2022.

We’ve seen viewer habits change steadily over the past decade or so. Now, with two new generations — Millennials and Gen Z — coming into focus as part of the coveted demographic slice, it’s even more important to understand what devices they use to consume their content and what habits they form. It’s also worth knowing how streaming fares against traditional, or linear TV.

1. Viewer habits are changing, and traditional television is still declining in popularity, as it has for the last several years. The average time that adults 18 and older spend on live and time-shift television decreased by 13% between Q3 2018 and Q3 2020.

2. Of the five hours and 21 minutes the average US adult spends watching video each day, 29% is spent watching TV-connected devices, video on a computer, or video-focused apps/web on a smartphone or tablet.

4. When asked what they’d prefer to watch with two hours to kill, only 5% of live streamers said they’d turn to traditional live TV. More than half said they’d watch YouTube.

6. One reason for the increase in streaming is the wider availability of smart TVs. 80% of US homes have at least one internet-enabled TV.

7. Q3 2021 saw a 64% YoY increase in viewing time for smart TVs as well. That’s double the YoY growth for viewing on mobile phones.

10. People watch an average of 18 hours of online video per week, an increase of two hours per week YoY.

11. The daily average for online video in 2021 is 100 minutes, the equivalent of 25 continuous days of video per year.

13. Taking live streaming content as a whole, the total number of hours watched across all streaming platforms as of Q2 2021 was 8.99 billion.

14. Just looking at Twitch’s YoY growth between 2020 and 2021 proves that the popularity of live streaming wasn’t a pandemic fad. From March 2020 to March 2021, Twitch’s monthly active users increased by 69%.

17. Twitch takes the top spot for hours watched in 2021, but other live video platforms have seen impressive growth too. As of Q3 2021, Facebook Gaming boasts 521 million hours watched, a 61% YoY increase.

18. If we measure by active users rather than hours watched, Facebook leads with almost three million monthly active users as of Q2 2021 — making it the largest website in the world with live streaming capabilities.

22. Watch time for Facebook Live streams has grown too — four times over the course of a year.

23. When we look at websites dedicated to video, YouTube is at the top with 2.9 billion monthly active users worldwide.

24. YouTube Gaming saw a viewership spike during the pandemic, just like Twitch and Facebook. However, by Q2 2021, the average number of hours watched decreased to pre-pandemic levels, at 1.2 million hours.

26. In 2021, TikTok became a hugely popular video platform and started offering live streaming in June. TikTok passed the one-billion-user mark in September 2021, making it the fourth most popular social networking app in the world if you exclude messaging apps.

👀 What are they watching?

Live streaming has gone hand-in-hand with gaming since its inception, and gaming categories dominated Twitch until the pandemic in 2020. Now, niches like crafting, music, talk shows, animals, and more have a spot in live streaming. 2021 was also the year that live shopping started gaining a foothold outside of China, where it’s been popular for several years. The biggest sporting event in the world, the Olympics, also boosted interest in sports streaming in 2021.

29. Music has become a popular live streaming niche, especially on Twitch. Hours watched in the Music category on Twitch reached a peak in May 2021, at 26.6 million hours. That’s a 135% increase since the pre-pandemic figure of 5.61 million watched hours in January 2020.

30. According to our data, only 54% of content creators stream about Esports.

31. Despite the interest in other streaming niches, the remaining nine of the top ten most popular categories on Twitch involve gaming. As of December 2021, Grand Theft Auto V, League of Legends, and Valorant come in just behind Just Chatting.

32. Live streams about gaming have become less popular on YouTube, which saw a dip in hours watched for gaming content in Q1 2021, going from 1.92 billion to 1.37 billion.

33. The most watched channel on Twitch as of Q2 2021 was xQcOW, racking up 90.42 million hours watched. He mostly streams gaming content.

34. The 2020 Tokyo Olympics, which took place in Q3 2021, saw the most streaming and social engagement in the history of the Olympic Games. Of the 206 countries that participated, 170 had active social media accounts.

35. Those 170 countries made about 67,000 posts, of which 10% were video. The social accounts for these countries racked up 85 million video views on Facebook and YouTube.

36. E-commerce streaming soared to new heights recently as well. Viya, a Chinese streamer from the platform Taobao, managed to generate almost $50 million worth of sales by promoting products during a live stream.

37. China is a hub for e-commerce streaming, which accounted for 4.5% of total gross merchandise value for online shopping in 2019. It’s projected this proportion will climb to 20.3% in 2022.

38. The live shopping category that attracts the most streamers is apparel and fashion, at 35.6% of e-commerce streamers. Beauty and fresh food follow behind at 7.6% and 7.4%, respectively.

39. One type of live video that people grew tired of in 2021 was news and current events. Global news accounts saw a 17% decrease in total views on YouTube and Facebook and nearly a 14% decrease in average engagements per video.

40. The live stream that holds the record for the most concurrent views on YouTube is Felix Baumgartner’s space jump with a peak viewership of eight million.

41. The Twitch stream with the highest viewership ever was streamed by TheGrefg, aka David Cánovas Martínez, on January 11, 2021. His stream hit 2.47 million viewers.

Several factors contribute to the live streaming industry as a whole, such as reliable internet access and the availability of streaming-enabled devices. Let’s check up on the forces that shape the industry and see how well live streaming is faring.

43. This rate is down from the previous year, however. 2020 saw a 34% increase in global internet bandwidth due mostly to the pandemic.

45. The country with the fastest fixed broadband in the world in 2021 is Singapore at a 188.11 Mbps download speed.

46. The fastest mobile internet is in the United Arab Emirates with 130.19 Mbps.

47. Q3 2021 was the first quarter ever in which all six world regions tallied buffering under 1% — a huge accomplishment for live streaming.

52. Social commerce will be an $80 billion industry by 2025, and with 46% of marketers using live video as a social media tactic, live shopping is sure to keep growing.

53. Video marketing keeps reaching new heights as well. 76% of marketing teams who took part in a video marketing survey said they invested in video production in the last three years.

54. In that same survey, 94% of respondents said that watching a video has helped them make a purchase decision at least once.

55. Video marketing keeps growing and growing. 86% of marketers now use video as a marketing tool, and 94% consider video an important part of their marketing strategies.

56. Live video marketing wasn’t just a pandemic trend, either. 91% of marketers who are live streaming say they will continue even after the pandemic ends.

😉
57. Multistreaming with Restream remains the number-one way to truly maximize your audience reach. Choose from more than thirty social channels (YouTube, LinkedIn, Twitch, Twitter, Facebook, and many others) to stream at once.

Whether you’re an audience member, a content creator, or a marketer who wants to explore various use cases for live streaming, you should get the same takeaway from these stats. Live streaming is not only alive and well, but it’s thriving. In 2022, it will continue to grow and attract more audiences and content creators.