Regardless of whether you’re a streamer starting out or an experienced Twitch frequenter, there are certain abbreviations, streaming words, and expressions that some of us just do not quite understand.

In this article, we’re going to break down some tricky terms users tend to stumble upon most often: from the basic live streaming definition to scary things like H.264 and SD-CDN. We’re going to list each one in alphabetical order.

AAC (Advanced Audio Coding) is a standard audio coding technology implementing major audio compressing strategies to reduce the amount of data that has to be transferred in order to achieve good sound quality.

Adaptive streaming (adaptive bitrate streaming) is a setting option within some encoding software interfaces, the ability to stream video to the end user at the optimal viewable quality. This feature provides the highest usable video quality for each specific user.

Bitrate is the number of bits being processed within a single unit of time (normally one second). Since data is measured in bits, the bitrate measurements are presented in either bits, kilobits, megabits, gigabits, or terabits per second.

Buffering is a delay prompted by the data preloading process. This is done in order for the streaming to continue smoothly. Buffering is usually caused by low bandwidth, weak Wi-Fi, issues on the stream source server, or user overload.

A capture card is a computer-connected piece of hardware equipment that converts captured video signal into a streamable format. The connectivity means vary from model to model and can range from USB to PCIe, etc.

A CDN (Content Delivery Network) is a distribution network on the Internet that is meant to drive the delivery of web content to users worldwide.

A CPU (Central Processing Unit) is a central processing device on any computer. It is an electronic chip that controls every instruction-specified process in a laptop, personal computer, smartphone, or tablet.

Dedicated bandwidth is the kind of bandwidth that is saved to be used by a single purpose exclusively. With exclusivity in mind, it becomes possible to ensure a certain amount of bandwidth for a stream duration.

Download speed is the speed at which data can be transferred to a user’s device from the Internet.

Embedded video is a video integrated onto a webpage. Even though it appears on a page of a site, it is actually hosted on another resource. HTML coding allows embedding of various video formats, including VOD and live streams.

Video encoding is the process of converting a video file from one format to another. This is normally done to ensure that whatever’s happening on the screen gets properly encoded into a digital format that is streamable.

A firewall is a network security system, software that follows all incoming and outgoing traffic closely. It can block unauthorized access. If not set up the right way, firewalls are known to interfere with streaming.

FTL (Faster Than Light) is a new streaming protocol that allows streamers to interact with their viewers in real time thanks to its ultra low latency.

Geo-blocking is a setting that can be browser-based. By changing the setting you are able to restrict access to content depending on location, which is usually established through an IP address.

Green screening and chroma keying are two streaming-related terms used interchangeably to describe a technology that allows for incorporating a virtual background into a live video. Animated virtual backdrops are widely used in a number of industries, including video games, newscasting, and movies.

H.264 (advanced video coding) is a standard video codec, a video compression technology that is most commonly used to record, compress, and distribute video.

Hardware encoding is the process of converting from a video source to a streamable format. A hardware encoder is a dedicated physical device that captures, compresses, and converts videos.

High Definition (HD) resolution refers to an image not less than 720p but more likely 1080p in height.

HDMI (High Definition Multimedia Interface) is the kind of interface made to transfer video and audio to and from cameras (or other HDMI compatible devices).

An IP camera (Internet Protocol Camera) is a camera that receives and sends data using an Internet connection. Their great advantage is no need for a recording medium.

Keyframe interval is an element of the video compression process. The keyframe interval is a setting, normally within an encoder, that shows how often keyframes are set in one video. The more activity you’ve got in your stream, the smaller you want your keyframe to be set to.

Latency is a delay between the action and the response to it. So, the lower the latency, the less time it takes for data to reach the end user after being released.

Live streaming is a real-time video broadcasting process with the advantage of audience interactivity.

Lossless compression is a video/audio compression format that maintains every bit of original data from the sources (full quality).

Lossy compression is the opposite of the latter. This process removes some of the information in order to process and stream your video.

Low latency is a video streaming term normally used in conjunction with “network.” A low-latency network is a set of devices that allows for sending big volumes of data from one computer to another with as few delays as possible.

Mixer is a relatively new live streaming platform for video gaming. It uses the FTL streaming protocol, which allows sub-second latency. Twitch and Mixer are considered the main rivals in the live game streaming industry.

A ping is a test signal that is sent to a server in order to check out how fast it does just that. It is usually measured in milliseconds.

A PTZ camera (pan, tilt, zoom camera or robot camera) is a camera that can be controlled at a distance. Video conferencing and live production are the fields that can particularly benefit from a camera like this. There is also an advanced variation of the PTZ camera: a VPTZ high-res camera that does all the panning, tilting, and zooming virtually, omitting any physical movement.

Restream Studio is a new Restream tool allowing you to go live right from your dashboard by turning your webcam on. We’ve facilitated the process of multistreaming for you by extracting a video encoding step from your broadcasting process.

RTP (Real-time Transport Protocol) is a network protocol designed to deliver audiovisual data over an IP network. This particular protocol is widely used in the streaming industry as well as video conferencing.

RTMP is a protocol that provides transmission of various data over the Internet. It is used to aid low latency connectivity in particular. The process of larger-portion data transmission is backed up by splitting streams into smaller packets. This protocol allows you to stream to many different places and increase your audience proportionally.

Satellite uplink/downlink chains are communication chains going down from a satellite to the ground and back up. If uplink and downlink are released simultaneously, the connection is called two-way.

SD-CDN (Software-Defined Content Delivery Network) is a name for a specific content delivery network that uses several CDNs in order to improve UX.

Simulcasting (Multistreaming) is a way of broadcasting a single live stream to multiple channels and content delivery platforms.

Software encoding is identical to the process of hardware encoding, except for it is a program and it runs on a computer. In addition to producing as good of video quality as hardware devices, software encoders also present an opportunity to tweak a lot of settings to your personal taste.

Standard Definition (SD) is a high-definition resolution that refers to an image of 720p in height.

Streaming software is a program that enables video input conversion into a format that allows playback and, consequently, broadcasting (streaming).

Streaming setup is a streaming expression typically referring to the live streaming process itself, but also to the camera, cables, capture device, encoding software/hardware, Internet connection, etc. that is being used.

Streaming video (streaming media or live content) is a piece of media that is watched in real time within a web browser rather than downloaded into a file on a hard drive.

Switcher (video mixer) is a piece of hardware or software that aids selection between several visual input sources and sends the chosen signal to the output upon command. It is widely used by production managers to select between several camera angles during a large-scale production process.

Transcoding is the process of taking encoded content, decoding it, altering it in a way, and recompressing it back.

Upload speed is the speed your computing machine uses to send data to other users on the Internet. This speed is measured in megabits per second.

Video copyright is making sure that every user who watches videos you’ve created is aware that using it without your consent is illegal. Other additional actions can be made in order to further protect your “property,” but generally a video is protected by copyright law once created.

Video hosting is the process of uploading and storing your video/videos on a third-party website. Your viewers can take a look by visiting the video hosting site or watch it on yours if you choose to embed it.

VOD (Video On Demand) is a piece of content that can be watched by a user at any time instead of a specified moment.

Now that you know the meaning of the words you keep running into while exploring your live streaming opportunities, you may as well check out one more awesome shortcut. Restream is a multistreaming service allowing you to stream your videos to 30+ platforms at the same time: Facebook, Youtube, Twitch, and Twitter to name a few. Build up awareness and authority among your fans and viewers fast. Stream to many platforms instead of one.

We’ve capped most of the livestreaming terms we could think of. To learn more about live streaming, feel free to browse our blog for more info. 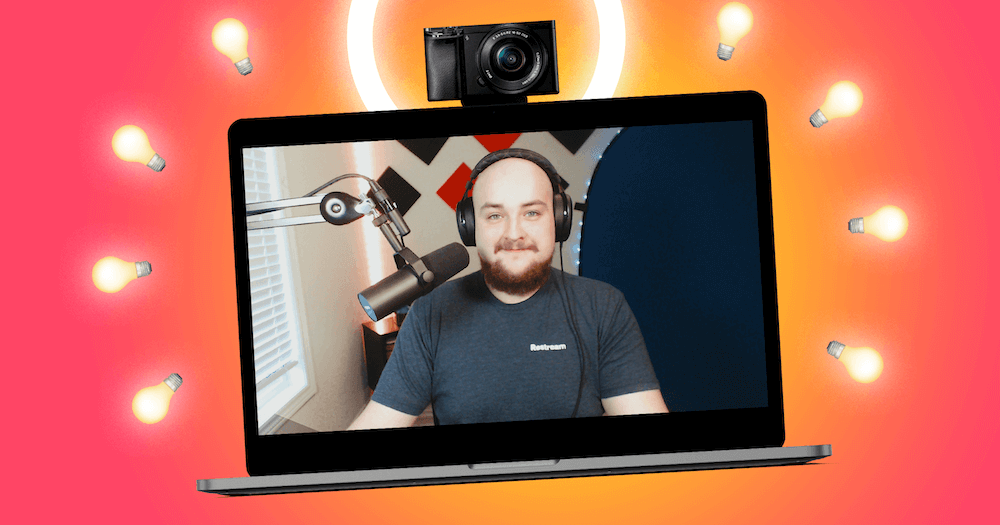