The gaming industry has exploded in 2020, and influencer marketing in this space has never been hotter. Restream’s Friday Lives host Anya Razina spoke with Sean St. Laurent, Influencer Marketing Manager at Gameloft. Gameloft publishes a variety of titles for mobile and PC, including Asphalt 9, Modern Combat 5, Disney Magic Kingdoms, and many more.

Read on for his thoughts and advice on live streaming strategies, working with content creators, and how to get noticed by marketing teams.

How does live streaming fit into an overall marketing strategy?

Sean emphasises the importance of distinguishing a social strategy for each game. Much like content creators themselves, there’s no one-size-fits-all approach to the company’s live streaming. Some games lend themselves to streaming on a regular basis, like Overdrive City or Asphalt 9. Others require a more creative marketing plan to get noticed, which is where content creators come in.

Content creators are an integral part of Gameloft’s social strategy. Live streamers come in all shapes and sizes, some with huge followings and others with more niche audiences. What interests Sean the most about his job is helping organic content creators grow their brands.

We try to avoid one-off deals because we want to build relationships with these creators. It's cliché in the industry to say that, but it's really true. Having these one-off deals doesn't feel super authentic when you do them.

For Sean, the sweet spot is a mix of organic content creators and paid sponsorships, or even collaboration between the two. He sees supporting creators and encouraging creators to support each other as a win-win. Streamers build up their brands and gain larger audiences, while Gameloft spreads awareness about their games.

Sean doesn’t hesitate to point out one of the advantages of working with independent content creators — most of them are definitely not one-trick ponies! Many live streamers act, direct, edit, write, or animate all on their own. There’s value in working with someone who can bring so many practical skills to the table, in addition to their creativity.

Creativity is the other big advantage to working with content creators and influencers. In-house teams undoubtedly have a wealth of talent and ingenuity that they bring to their companies. That’s why they were hired, after all! But independent creators can bring new styles, new aesthetics, and new content a company wouldn’t have been able to do before.

It’s really cool to see what influencers are able to do by themselves.

When things don’t work out with influencers as planned

Of course, not every deal with a creator works out flawlessly. Sometimes an influencer doesn’t deliver on what they promised. They might say or do something that goes against how a company wants to brand themselves.

Sean admits these situations are difficult and advises honesty and transparency for dealing with them. He mentions a time when Gameloft provided late-game items to a streamer they had partnered with, thinking it was a good move to help boost the steamer’s audience. It backfired, though, and both Gameloft and the content creator received backlash for messing with the competitive integrity of the game. To remedy the situation, Sean offered up full transparency to the content creator and the fans, admitting where the company had gone wrong.

Working with these creators, you want to try to be as honest and transparent as possible.

Another way to avoid mishaps is by giving influencers more creative freedom. In Sean’s opinion, if you give creators a lot of leeway, they’re less likely to deliver unsatisfactory content.

How do you set ROIs and KPIs for influencer campaigns?

Working with influencers in any industry can be a gamble, as both pricing and content are all over the map. Unless you have hard and fast ways to measure success, it’s difficult to know if a campaign worked.

When launching a new streaming campaign, trying to achieve everything can be a mistake. It would be great if every campaign led to measurable increases in brand awareness, conversions, and engagement. Realistically, however, it makes more sense to choose one objective and stick to it, according to Sean. He and his team tend to focus on either brand awareness, performance campaigns, or engagement.

The strategy for finding new influencers mirrors the overall streaming strategy — it depends on the game. Not every game has a creator program, and the ones that do have different criteria and thresholds based on your number of subscribers.

When we work with influencers, we try to find someone who has a lot of influence, and that doesn't necessarily mean a bigger audience.

The best way to get noticed by influencer relations managers like Sean is to find a game you like and create content consistently. He and his team are always on the lookout for new creators, like talent scouts for college sports. If you’re creating content for a particular game on a regular basis, chances are, the Gameloft strategists already know your channel exists. Sean says he consumes between 10 and 12 hours of content per day, looking for new genres, different styles, different aesthetics, and most importantly, consistency.

What to do if you get ghosted (hint: don’t be pushy)

Sean admits that nobody likes dealing with influencers who are pushy or feel entitled to something after their first contact with an influencer manager. Streamers should definitely reach out to people like Sean, sending cold emails to make contact. But they shouldn’t expect a deal, and should focus on showcasing their content as best they can.

If you’re a streamer who’s already made a deal, and the gaming company ghosts you, what should you do? If it’s a paid deal and you signed a contract, you have legal recourse you should absolutely turn to. If it’s not a paid deal, keep in mind that they might not be ghosting you on purpose. Some companies don’t have the resources they originally planned for and won’t be able to commit to a deal with you at that time.

And if the company does ghost you on purpose, the best thing you can do, as a streamer, is keep creating content. Maybe move on to a different game, but the best revenge toward a company that ghosts you is showing them how little it affects you. Take it in stride, and try to keep moving forward.

Ghosting is one bump in the road of many bumps that you’re going to experience while creating content.

Has the pandemic changed live streaming for gamers?

Since the pandemic started in March 2020, the gaming industry has exploded. Content creation and live streaming haven’t been affected too much — most creators work from home anyway. The change has come, instead, to the messaging.

Although there might be more opportunities than ever to do campaigns with content creators, game publishers shouldn’t take advantage of the situation and appear opportunistic. It’s a global crisis, after all.

From a strategy point of view, or from a performance point of view, it would really make sense to do these influencer campaigns at the moment. But at the same time, you don't want to capitalize on a global crisis for your own means.

👾 The future of LinkedIn Live and gaming

LinkedIn Live is one of the newest opportunities to live stream, and only a handful of platforms let you stream to LinkedIn Live (including Restream). How could LinkedIn and live stream gaming intersect? Sean thinks CEOs should play their companies’ games. He also thinks it’s a great opportunity for development-related content, like webinars on 3D modeling or how programming works in certain gaming aspects.

💃 Live streaming in the fashion industry

Before his work in the live streaming and gaming industries, Sean worked in fashion. He says that live streaming fashion shows could be a great way to bring more of the general public into this typically very closed-off, elite industry.

Let’s wrap everything up

Both gaming influencers and game publishing companies can benefit from Sean’s insights:

Big thanks to Sean St. Laurent for sharing his experience, advice, and insights with us! 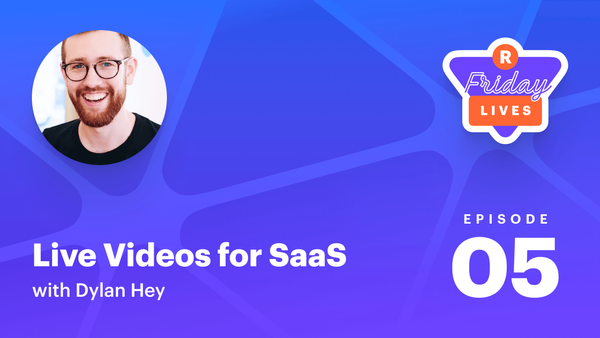 Learn about live streaming as a marketing tool for SaaS companies and what role PPC plays, as well as insights on podcasting, live streaming, and LinkedIn Live.